Has the time perhaps come for Paris to enter into a new phase of the Art Nouveau Route in order to invigorate its Belle Époque heritage? Currently abandoned and in the process of being sold, the Hôtel Mezzara mansion, built at 60 rue de la Fontaine in 1910 by Hector Guimard, is the perfect building to create this space, a beacon of French Art Nouveau. The association Le Cercle Guimard has begun working towards acquiring the mansion to convert it into a living testimony to the architect of the Paris underground – and in the process, provide the missing link between the French and European Art Nouveau movements.

Located in the Auteuil district of the 16th arrondissement of Paris, the “Hôtel Mezzara” is one of the most interesting buildings by the architect Hector Guimard. Far less renowned than his entrances to the Paris metro, this work surprises with its elegance and its perfect response to the program of the sponsor: a place intended for family life, but also for receptions and the artistic creativity of an industrialist specialized in textiles.

Paul Mezzara, born in France in 1866, had an artistic personality which enabled him to start an artistic career before moving on to industrial arts by founding in Venice, then in Paris, a lace and embroidery factory which provided him with a solid financial position. Having become a recognized personality in the field of decorative arts, he was elected, at the same time as Guimard, in 1910, a vice-president of the Society of Decorative Artists. Thereafter, the evolution of Mezzara’s social status allowed him to consider acquiring a Parisian mansion and his relation with the architect made it logical for him to pass the order in the same year 1910.

Using a plot of land he had acquired near the “Castel Béranger” built fifteen years earlier, the “Hôtel Mezzara” testifies to the evolution of the Guimard style, mellowed and elegant, while remaining faithful to the principles enacted in 1899. Façades and interior spaces deploy a decorative refinement whose cost is nevertheless mastered by an architect who was able to connect with industry, while producing invaluable and unique pieces such as the furniture of the dining room, his only set of furniture to have remained in its original location.

Its large hall, illuminated by a stained-glass window with a surprising staircase, shows that Art Nouveau is the first of modern styles and that it has not just been a decorative revolution

As part of the exhibition in Barcelona in 2012 entitled “The Other Pedreras”, dedicated to the great contemporary works of Gaudí´s Casa Mila, the Mezzara mansion was a clear winner as the representative building of Parisian Art Nouveau.

Le Cercle Guimard is planning the creation of a Guimard Museum to provide substance to this project, to be headquartered in the mansion in order to ensure the future and promotion of this Art Nouveau jewel. But Le Cercle Guimard is also aware that it cannot undertake this ambitious project alone and has called on all institutions and lovers and fans of Art Nouveau to join in supporting it with this initiative.

Contact our association now for the good of Art Nouveau, Paris and Guimard. 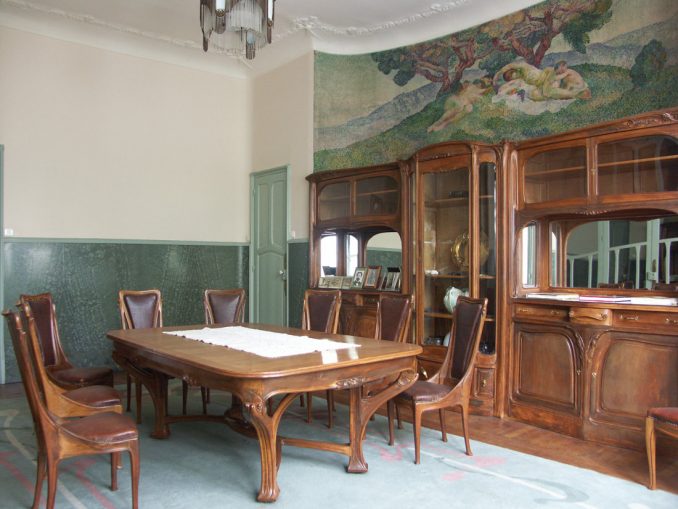