Almost nothing remains of what was one of Hector Guimard’s masterpieces, the Salle Humbert de Romans, built on rue Saint-Didier in Paris from 1898 to 1901 for a real estate company with uncertain capital founded by a Dominican friar. This patronage, which included a huge auditorium, was doomed to commercial failure so certain and so rapid that it disappeared before 1905, leaving only its plans, a handful of photographs, a large organ currently located and a few seats that were found much later. Without any exaggeration, this is a waste comparable to the disappearance of Victor Horta’s Maison du peuple, with the difference that the Salle Humbert de Romans did not even have time to enter the memory of Parisians. 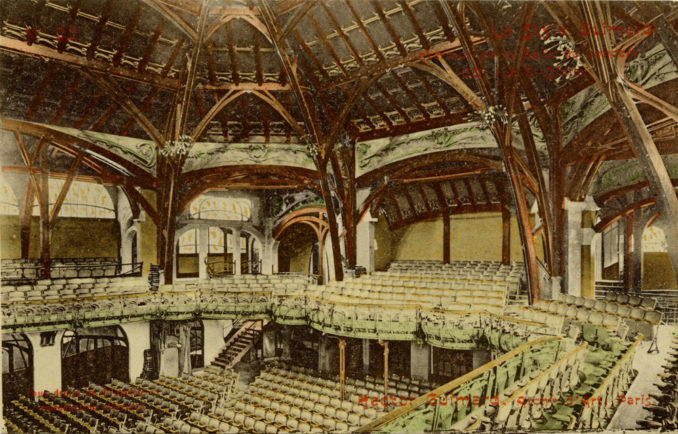 Around 1900, to equip this theatre, Guimard designed several models to be executed in cast iron. He had already worked with the Durenne foundry, notably for Castel Béranger, and was in the midst of the construction of the Paris metro, whose castings were in demand at the Val d’Osne. Guimard left these two large companies in the Haute-Marne to turn to a third, smaller foundry in the same department, the Saint-Dizier foundry[1]. This was the beginning of a collaboration that would undoubtedly last beyond the First World War and which would lead to the publication in 1908 of a very extensive catalogue of Guimard’s specific models.

The cast iron models are primarily used for theater seats with lift-up seats, but also for balustrade designs, cloakroom supports, consoles and radiator cover panels. All of these cast irons were produced and installed before 1901. At that time, Guimard probably did not envisage their edition for the general public, although he may have considered reusing the model of the show chair for other venues. When the time came to put together a catalogue of models for their edition by the foundry, he would no doubt consider that most of the models created for the Salle Humbert de Romans were too specific or too stylistically dated to be included in the catalogue. He simply took the design of the radiator covers and transformed it into a design for a stone balcony railing. 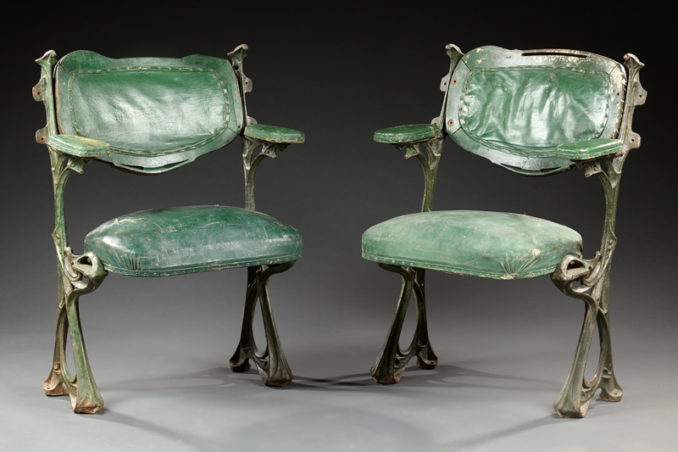 However, he did include in the catalogue this model of armchair leg with the code GA, at plate 40, in the hope of having it reproduced for other theatres, which, to our knowledge, did not happen. Note that in this illustration from the foundry catalogue, the backrests are mounted head to foot.

This is not a Guimard: theatre armchairs

Cast iron theatre armchairs with folding seats, similar to those created by Guimard for the Salle Humbert de Romans, have appeared several times on the art market over the last three years. In this article, thanks to our German correspondent Michael Schrader, we present them and compare them to the original armchairs. In a future article, we will describe the original armchairs in more detail before tracing the history of their rediscovery in the seventies.

In 2018, the German auction house Mehlis in Plauen offered two of these cast iron concert chairs. They were then described as reproductions from the end of the 20th century, based on a drawing by Guimard around 1901. Unsold with a reserve price of €900 each, they also failed to find a new buyer at a later auction with a reserve price of €500 each. 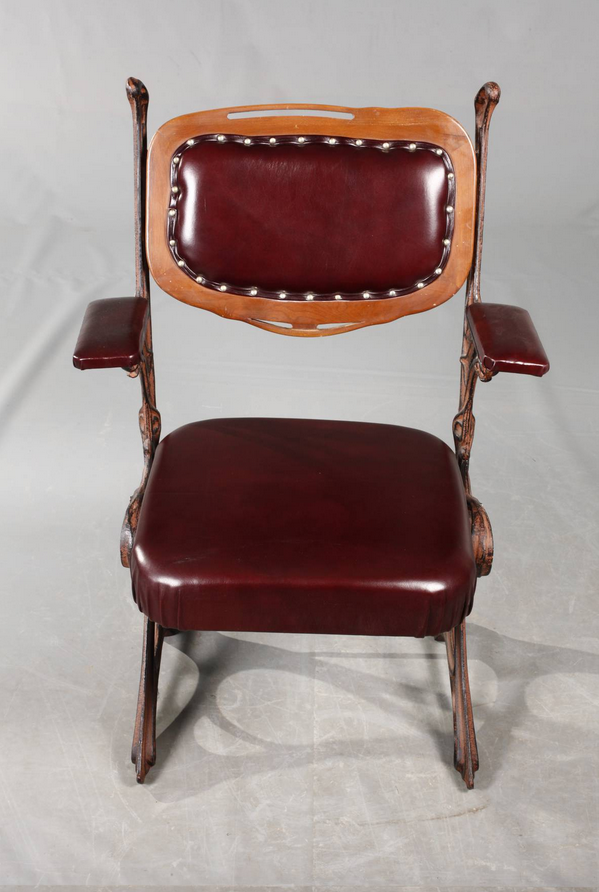 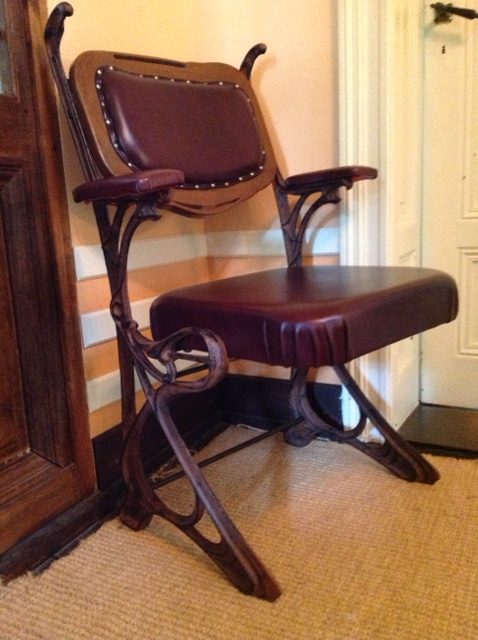 An identical armchair is currently on sale on eBay for €1239, by the German antique dealer Denes Szy from Düsseldorf, who also offers it for sale directly through his shop for €1350. This shop originally had two copies on sale under the description “Cinema Art Nouveau folding chairs France, variant or after a drawing by Hector Guimard [1867-1942] for the Salle Humbert de Romans in Paris 1901. »

All these chairs come from a privately purchased lot from the Furthof Antikmöbel shop, which in 2017 offered twelve copies for sale under the following description: “Set of 12 Art Nouveau concert chairs, France circa 1900. The cast iron cheeks are attributed to Hector Guimard (1867 Lyon – 1942 New York City). The folding seat, backrest and upholstered armrests were added in the past”. According to the site page, of this set of twelve armchairs, five have already been sold, two have been converted into benches and five more can be purchased for €850 each. According to the seller, the seats come from a family of circus artists who used to tour Europe and bought the set of twelve seats at the time. No further information is available. 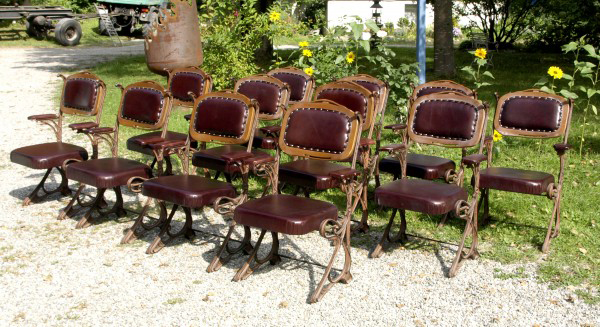 A view of all twelve theatre armchairs originally proposed by Furthof Antikmöbel. Note that the backrest is then placed upside down. 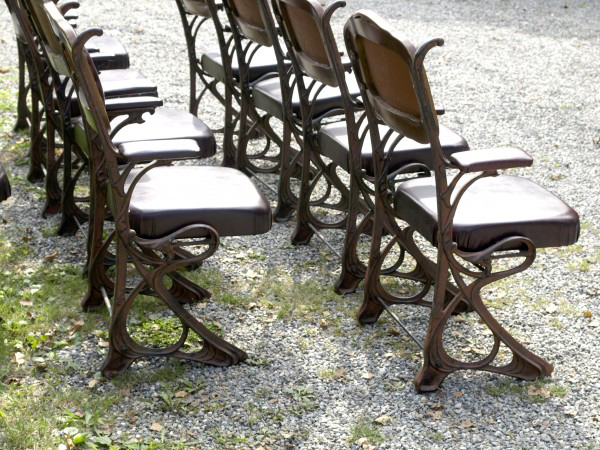 A view of all twelve theatre armchairs originally proposed by Furthof Antikmöbel.

Each of these armchairs is 98 cm high, 75 cm deep, 65 cm wide and weighs approximately 24 kg. Each consists of two cast iron side legs, a wooden backrest and a folding seat. The side castings are 53.5 cm wide and 98 cm high, while those of the Guimard armchairs are only 90 cm high. They are also thinner than those of the original Guimard armchairs. Their modeling is closely based on that of Guimard’s cast iron but is less detailed and even shows notable differences, especially at the upper end and in the foot area which is less complex and also much longer than those of the original armchairs. This last provision was probably adopted with the intention of giving more stability to the seats, but in reality proves to be useless. And unlike the original armchairs, there are no vertical holes in the cast iron to fix them to the floor. All these armchairs are presented individually with two side castings for each one and not in a row with n+1 castings for n armchairs. However, as in the original arrangement, a bar connects the two side cast irons in their lower area to increase stability. The cast irons, painted in a clay-brown colour, show striking traces of wear and tear everywhere, even in places that cannot be reached by natural wear and tear, suggesting that they were created artificially. 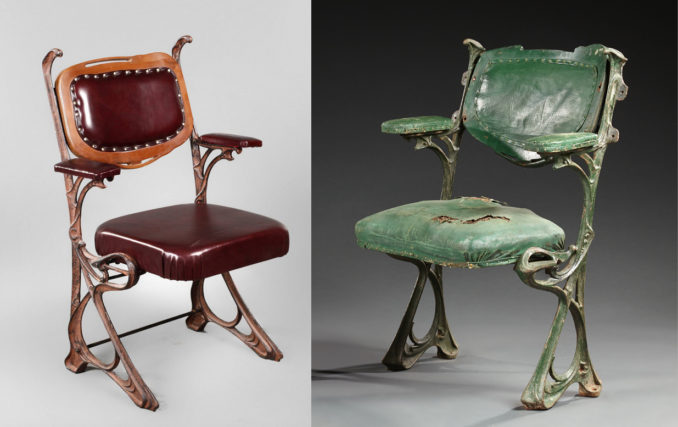 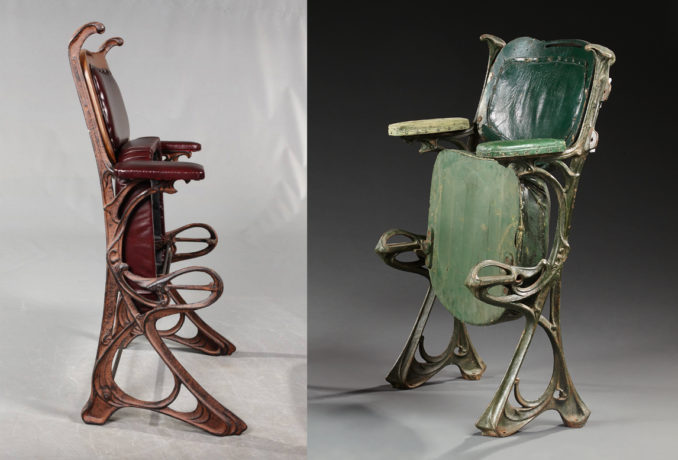 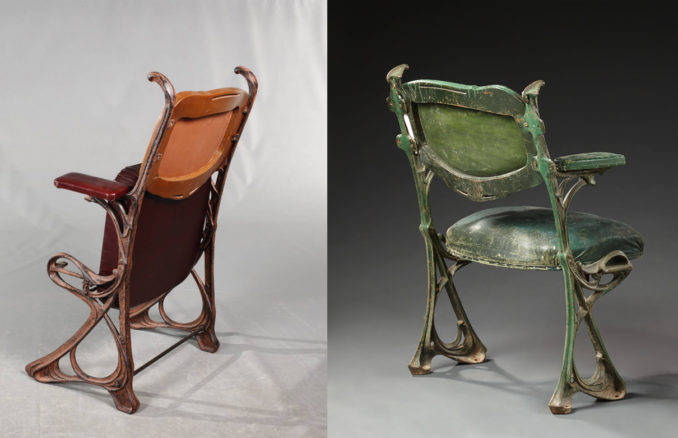 The shapes of the seat, armrests and backrest follow the shapes of the original armchairs quite closely. They are upholstered with foam (whereas the original was made of horsehair) and covered with red-brown synthetic leather (instead of the original green moleskin), which is riveted to the wooden parts. In contrast to the side castings, the wood of the backrest, which appears to be beech or fruit wood, shows almost no signs of wear and tear. The direction in which the backrest is fixed (using modern brass screws) is also variable. In the old photographs of the Salle Humbert de Romans, it can be seen that the curved horizontal crossbeam is pointing downwards. But in the illustration in the Guimard catalogue of the Saint-Dizier foundry, the backrest is facing the other way, as in the photographs of the series of twelve armchairs from the Furthof Antikmöbel shop (see above). It is therefore quite possible that this illustration served as a model for the armchairs presented here. 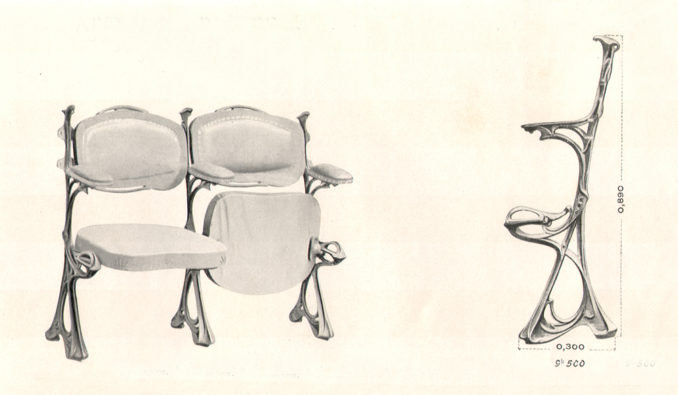 All in all, these armchairs therefore give the impression of a modern reproduction inspired by the original design of the Guimard concert armchairs. The reference to Guimard’s design is recognisable and yet the quality of the execution is only modest compared to the original. However, as far as we know, it is not clear whether these chairs were actually produced to be sold as period Guimard concert chairs. On the contrary, according to the description of the dealer Furthof Antikmöbel, a commercial use in a circus setting seems quite conceivable and this small series of these chairs could therefore have been manufactured with this in mind at the end of the 20th century. However, their successive resales risk seeing them fully attributed to Guimard.