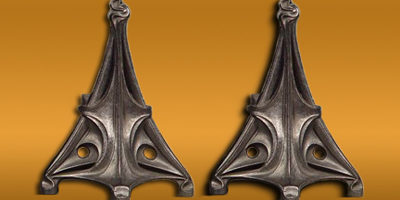 This is not a Guimard: a pair of cast iron firedogs

Our German correspondent Michael Schrader recently drew our attention to a pair of firedogs that was put on sale on November 12, 2020 for a few hours on the Proantic website. This site serves as an intermediary for antique dealers, in this case a gallery at the Paul Bert flea market in Saint-Ouen.

At the time, the firedogs were attributed to Hector Guimard with a selling price set at €2800. The advertisement mentioned the material (cast iron), the presence of a worn green patina and traces of rust. It also gave the dimensions: width 27 cm, height 39.5 cm, depth 41.5 cm.

As on all firedogs of this type, a horizontal wrought iron bar is screwed to the back of the front panel to receive the logs.

The front element has both a triangular shape and a triangular seat that ensures good stability for the firedog. Four different designs can be seen. At the base, an abstract openwork pattern seems to stretch forward from the center and the lateral ends to rest on the ground. In the middle, a naturalistic pattern consists of two feminine profiles whose hair is intertwined in the center. Above, emerging between the two faces, a stylized, openwork leaf inserts itself under the final decoration that ends the firedog with a point, again made up of abstract lines but reminiscent of a medieval gable.

In such a small space we find the main types of decoration found on many Art Nouveau style works: the harmonic arrangements of abstract and fluid lines, the evocation of nature with the leaf, the reference to the Middle Ages and especially these feminine profiles that provide most of the visual effect. The theme of the female figure is then most frequently used, especially since the flexibility of the body and hair combine particularly well with the sinuous lines used extensively. Whether on the European continent or in the United States, there are an infinite number of feminine motifs with disproportionately long hair that seem animated with a life of their own. If these hairstyles are most often dressed, enhanced by a hat, flowers or jewelry, it is not uncommon to find them in their natural state, as on many pewter or silver plated metal objects manufactured by the German firm WMF. 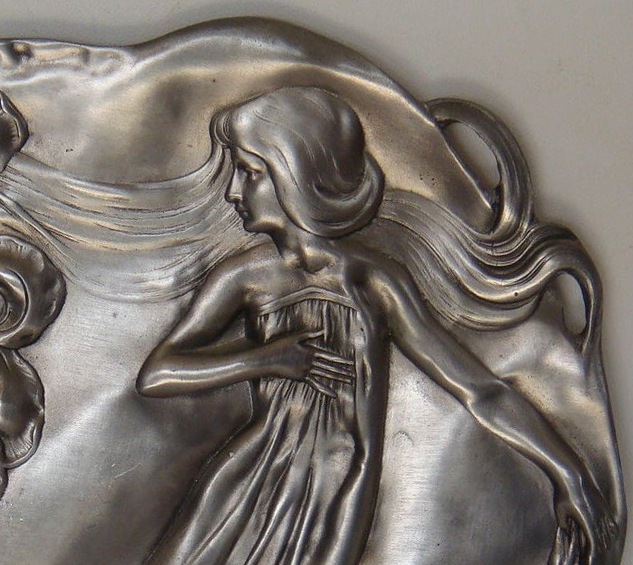 But the figures of this firedog are even closer to an illustration by Paul Berthon for the magazine L’Image. 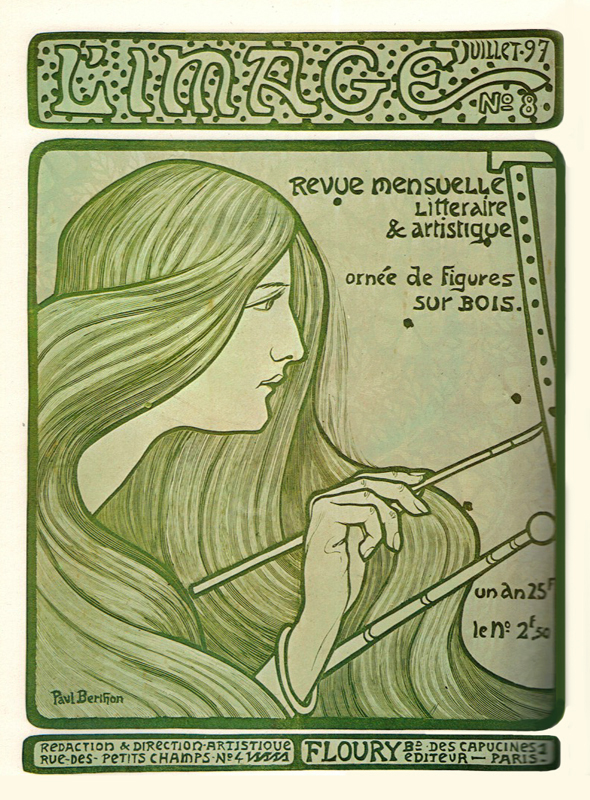 These feminine figured firedogs are in fact the “rich” version of a more often encountered model that is almost always attributed to Guimard. Also of a general triangular shape, but smaller and simpler, it consists only of volumes and abstract lines. The idea of stretching of the material that we mentioned at the base of the rich model is again used at mid-height, on either side of the lateral edges. At the upper tip, the pattern has been transformed into a kind of scroll that could evoke a flame or the smoke of fire.

It is of course the use of an abstract decoration that brings this model closer to Guimard’s creations without however allowing to find its characteristic modeling. Among the various sales made, we have chosen one model that is currently on sale in London for £2700 at a prestigious antique dealer specializing in fireplaces and their accessories: Westland Antiques. Their site shows good photos of it, provides its dimensions (width: 20 cm, height: 26.7 cm, depth: 41 cm) and of course attributes it to Hector Guimard “designer of the Parisian Metro decorative ironwork“. But it also reveals the existence of a foundry brand “a GF Anchor“. This double-letter code beginning with a G strangely reminds us of the Guimard cast irons produced in Saint-Dizier, which all begin with a G (GA, GB, GC, etc.). But, to our knowledge, the Saint-Dizier foundry has never used an anchor as a mark[1].

At the same time, the owner of the female-faced firedogs contacted us for further information and sent us more complete photographs which allowed us to better visualize the foundry brand, which turned out to be a “CF” and not a “GF”. It was accompanied by the No. 17 (whereas the simple model bears the No. 12), as well as the mention “registered”[2].

Detail of the back side of a firedog with feminine faces, with the mark of the foundry and the serial number.

We then contacted our network of correspondents of the ASPM (Association pour la Sauvegarde et la Promotion du Patrimoine Métallurgique Haut-Marnais -— association for the sageguard and promotion of the metallurgical heritage of Haute-Marne) who in record time responded by formally identifying the Camion Frères foundry at Vivier-au-Court in the Ardennes, a rural municipality in the Vrigne valley with a very important metallurgical past. The Camion brothers who settled in Vivier-au-Court in 1820 were descended from a master blacksmith who was well known in the Ardennes in the 19th century, Nicolas Gendarme, who owned the Vendresse blast furnace.

Cover of the catalog Camion Frères, 1895. Portal of the Cultural Heritage, website of Champagne Ardennes.

The Camion Frères foundry has also produced other models of firedogs, also equipped with a vague triangular front part.

Just as for the Camion Frères No. 12, they have had a richer version, this time bearing the No. 18. They are embellished with wiser female profiles than on the No. 17.

Detail of the back of a pair of cast iron firedogs Camion Frères No. 18, for sale at Catawiki.de. Photo internet.

The foundry Camion frères also produced other chimney accessories in the same style as this servant also decorated with a female figure with long hair. 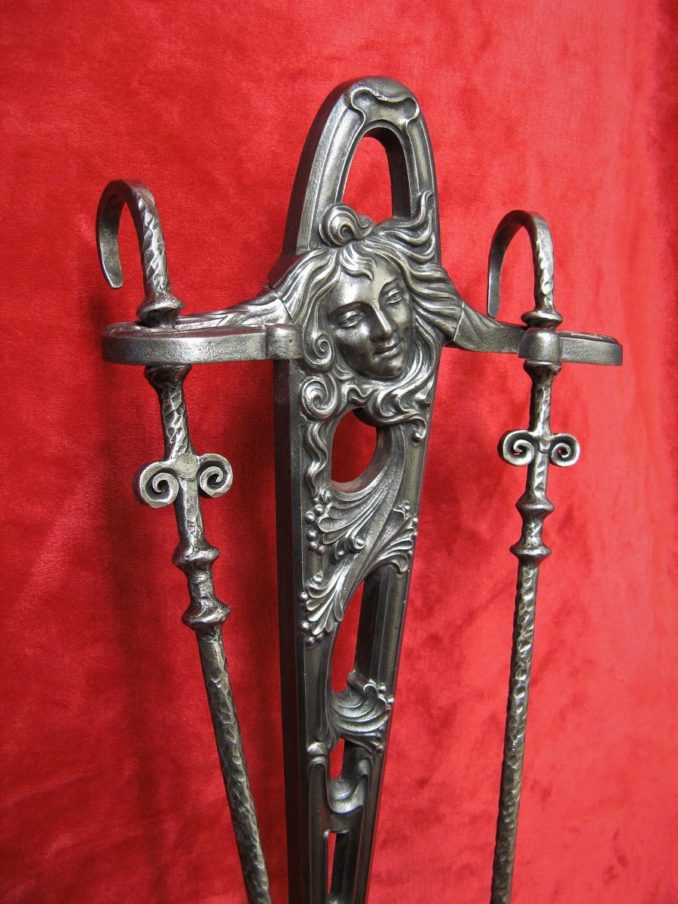 Cast iron chimney servant produced by Camion Frères foundry. Photo Marie-lise Weingartner. the Attic of the past present at Soissons (with her kind permission).

Since none of the Camion Frères firedog models were designed by Guimard, the question of their attribution still arises. In fact, this question comes up for almost all manufactured products for which an artistic, or at least decorative, intention was sought. The archives of the companies, today lacunar, are very discreet on this subject. For art casting, it is frequent that the catalogs mention the names of the sculptors who sold the reproduction right of their model because their names, when they benefit from a certain notoriety, are valuable both for the manufacturer and for the customer. But in the field of decorative art, apart from a few models bought from well-known decorative artists, this is more rare. All these models were not created within the company (the foundry in this case), but were bought at a firm price from a cohort of industrial artists who remained anonymous and who are suspected to have been mostly Parisian. The large foundries also had showrooms and offices in the capital where this type of business could be handled. For the modern style of the time most of the creation was done in Paris where designers could more easily immerse themselves in the current stylistic developments.

Numerous other models of firedogs were created in the Art nouveau style, whether they were mass-produced by a foundry like the previous ones or whether they were made by craftsmen, often of very high quality such as Edgar Brandt or Edouard Schenck. Let us also mention as an example a particularly elegant and interesting pair of firedogs which has been attributed for sale to Tony Selmersheim, but without any bibliographical reference. 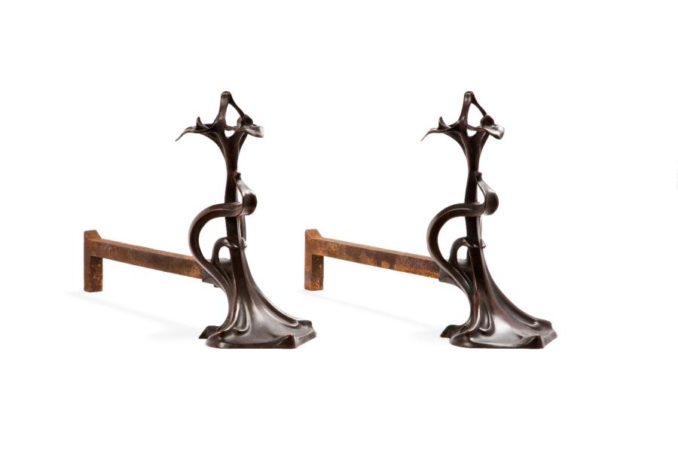 Last but not least, let us not forget the independent and almost autonomous creative hub of Nancy which has some beautiful models of firedogs. 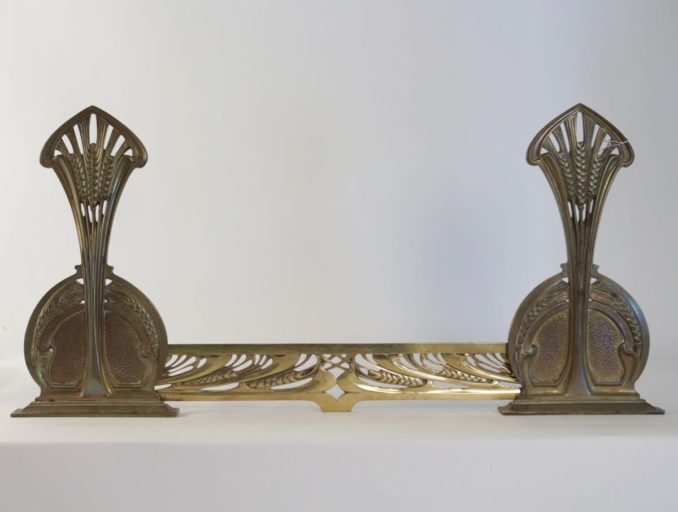 Pair of bronze firedogs and fireguard with ears of wheat pattern by Louis Majorelle. Internet photo.

For his part, Guimard, who has designed many fireplaces, has not failed to take an interest in their accessories. As early as 1903, he presented a cast iron coal grid in his pavilion at the Exposition de l’Habitation. 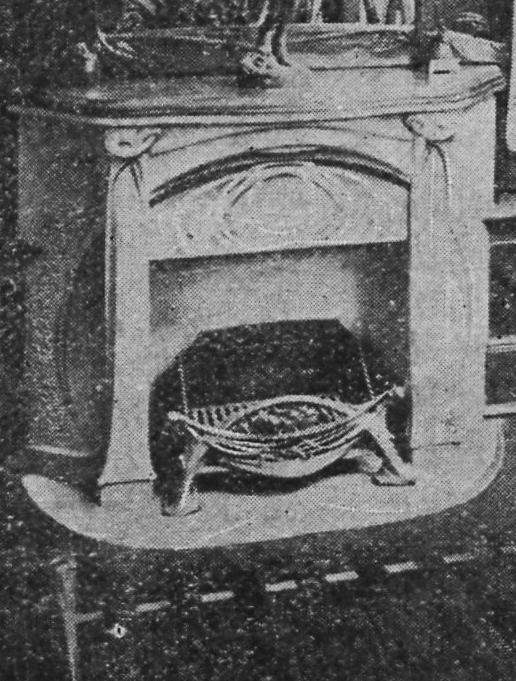 Coal grid by Guimard presented in front of an enamelled lava fireplace in Guimard’s pavilion at the 1903 Exposition de l’Habitation. Detail of a photo published in the Gil Blas, October 1903.

This grid reppeared a little later in the catalogs of Guimard cast irons which was published in Saint-Dizier from 1908. 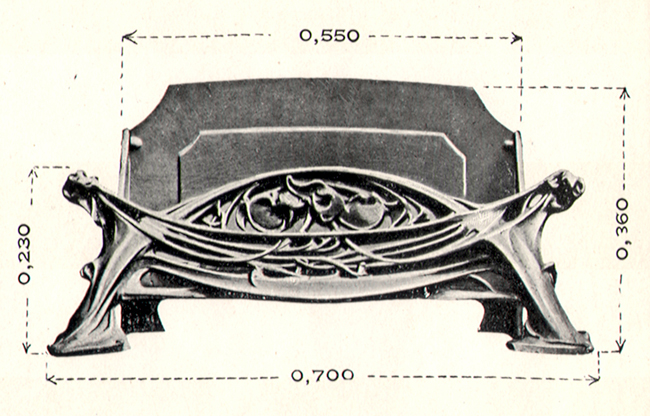 Still in these catalogs of the Saint-Dizier Foundry dedicated only to Guimard’s creations, we find, in addition to several models of fireplace interiors:

Interior of a fireplace GB by Guimard, catalog of Guimard cast irons in Saint-Dizier, from 1908, pl. 61.

and finally a pair of firedogs which seems to be the only model he drew. He concentrated the decoration in the upper half, while the base is soberly flared. 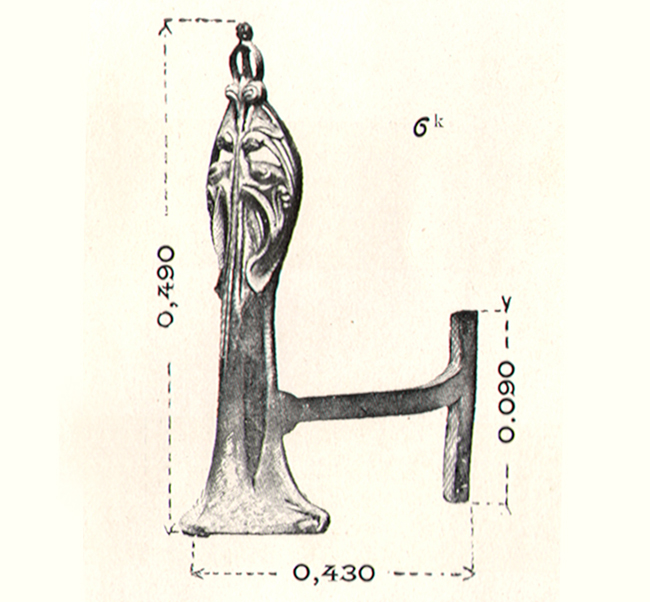 With a height of 49 cm, they are sold in four different depths: 33, 36, 39 and 43 cm obtained by screwing iron bars of different lengths to the back. 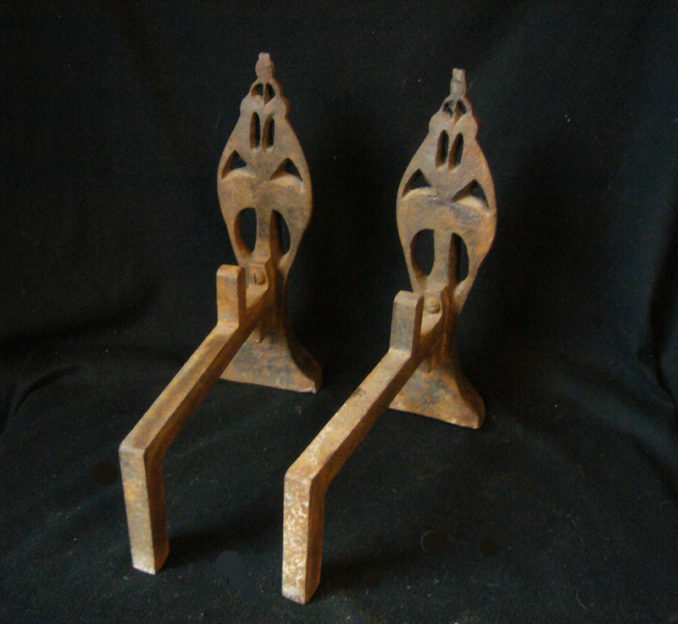 Guimard himself owned a pair, originally gilded, in his own private mansion, 122 avenue Mozart in Paris. 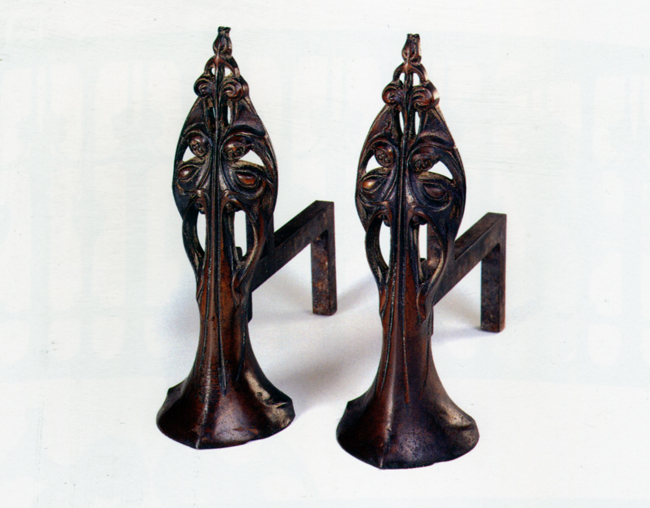 Pair of GA foredogs by Guimard, from the Hôtel Guimard, traces of gilding. Coll. from the Ecole de Nancy museum.

This gilded finish could not have been so rare since we know of another pair that also retains traces of gilding.

GA firedog by Guimard, with traces of gilding. Private collection.

Frédéric Descouturelle, with a collaboration from Michael Schrader

We sincerely thank our friends from the ASPM, Sylvain Roze, Dominique Perchet and Élisabeth Robert-Dehault for identifying the Camion Frères brand and the history of the foundry.

[1] Even though the local metallurgy newspaper was called L’Ancre (The Anchor). This motif of the anchor was then very popular for company brands. We remember that it was also used for the Farcot clocks and earthenware of the Fives-Lille company, some of whose production was often attributed to Guimard.

[2] This mention means that a deposit has been made at the registry of the Commercial Court.