The ceramic decorations of the Castel Béranger

The Castel Béranger’s ceramic decorations are usually renowned for being made of glazed stoneware and for having been produced by the Bigot company. But the discovery of new documents allows us to revise this opinion. We do not discuss here the stoneware mosaics that are mentioned in the article on the decoration of the vestibule. The latter, as well as the article on the panel with the cat arching its back, have been modified.

The Castel Béranger (1895-1898), an apartment building intended for the lower middle class, bore the hopes of a young architect anxious to make a name for himself through a media stunt and thus escape the fate promised to architects who had not graduated from the École des Beaux-Arts: a laborious and obscure life. Its composite and colourful facade bears the mark of the architect’s sudden conversion from a neo-Viollet-le-Duc style to Art Nouveau. It uses many materials: dressed stone, millstone, red brick, glazed brick, ironwork, ornamental cast iron, stained glass and architectural ceramics. 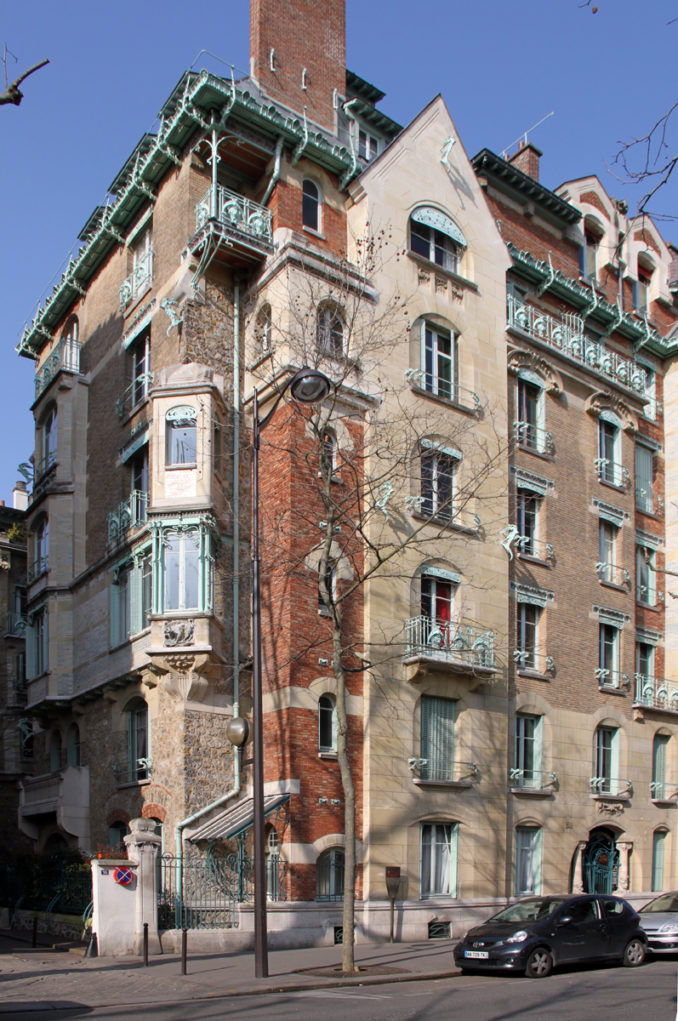 For the latter material, Guimard turned for the first time to two new companies, to the detriment of Muller & Cie[1] who had previously supplied him with the glazed ceramic panels he used to decorate his buildings. Of these two companies, the oldest and largest in terms of production volume is Gilardoni fils, A. Brault et Cie [2]. The most recent is A. Bigot et Cie[3], which has positioned itself exclusively on glazed stoneware[4]. Bigot was then very attentive to new stylistic trends and Guimard seems to have wanted to experiment with this new material with him. The list of contributors he included on one of the first plates of the Castel Béranger portfolio mentions these two companies in the following terms:

Photomontage by computer graphics of an excerpt of the plate from the Castel Béranger portfolio containing the names of the companies that executed the models. Private collection.

We are certain of Bigot’s participation on two supplies that received his signature: the decoration of the vestibule (signed at the bottom of each panel) and the fireplaces in some dining rooms.