Guimard’s contribution to the 1925 exhibition. 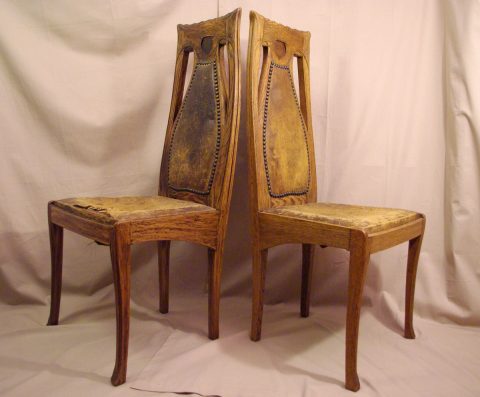 It is delightful to realise that research on Hector Guimard continues to yield surprises. There is a basic part of the architect’s production where much remains to discuss and discover: furniture and interior decoration.

For instance, recent and thorough-going research on the French Village Townhall, Guimard’s chief contribution to the 1925 International Exhibition on Decorative Arts, yielded a very interesting discovery: two oak chairs for the Mayor’s Office have just been identified.

Acquired from an antique dealer by a fervent Art Nouveau admirer who was intrigued by their silhouette, the chairs didn’t reveal their origin.

A few months ago, the chairs changed owner and a photo appeared proving that they did indeed come from the building imagined by Guimard for the 1925 Exhibition.

This discovery is important for several reasons. First of all, it enhances our knowledge of that building which was rather singular but relatively neglected by fans of our favourite architect-decorator because deemed less interesting than his creations predating World War I.

To date, only two almost identical photos of the building’s interior have been known. And yet they differ on a basic point: only one of them shows three (!) chair backs by the Mayor’s desk. Thus the pair of chairs placed for the Mayor’s assistants were  accompanied by a third, perhaps an armchair for the Mayor himself. The photo in question clearly shows that the third chair was different from the other two, having a gold coat-of-arms, an evident symbol of the Mayor’s rank. What became of the armchair? Despite our research we still haven’t been able to find it.

Above all, however, we think that the interest of these chairs is that they are a unique example of furniture designed by Hector Guimard towards the end of his creative period.

Was it not customary to say – with no later examples – that World War I put a stop to furniture creation by Guimard?